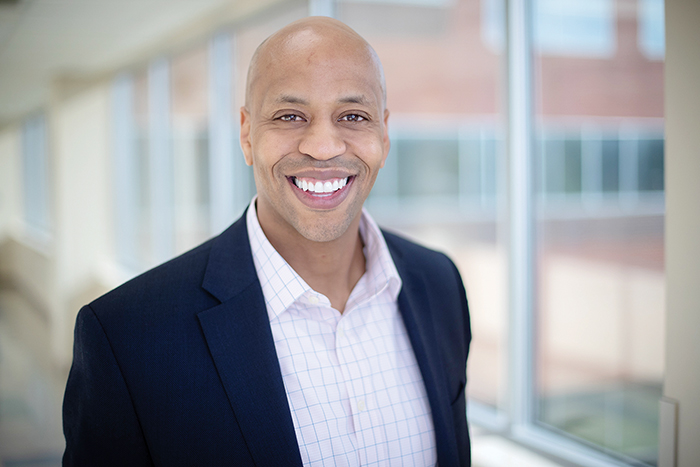 Saline Health System CEO Michael Stewart is leading by example. Now in his second year at the Benton, Arkansas hospital, the seasoned executive is putting his military and professional experience to work for the rapidly growing community of Saline County.

Born in Gainesville, Florida, Stewart was a military kid who spent his childhood bouncing around the U.S., early adopting the Air Force motto, "Service before self." After graduating with his Bachelor's of Science in mechanical engineering from Texas A&M University, he served four years in the Air Force and rose to the rank of captain before pursuing his Masters in Business Administration from McCombs School of Business at the University of Texas at Austin.

A passion for health care

Unbeknownst to Stewart, those military years were preparing him for a successful career in hospital administration. "Working as an Air Force engineer paralleled healthcare because I was responsible for base operations, and a base is a small city with a lot of different parts," he said. Early in his career, Stewart also had a unique opportunity to experience hospital administration by shadowing a college friend who served as CEO at a Dallas hospital. "He explained the ins-and-outs and how it matched up to the military, and I knew this was where I wanted to be," said Stewart, who soon accepted a residency position in a South Florida hospital and gained disaster preparedness experience courtesy of hurricanes Charley and Frances. From there he accepted a CEO position in the high desert of Southern California, and eventually relocated to Northwest Arkansas for a role as COO at Northwest Medical Center in Springdale. In 2014 he accepted a position as CEO of Navarro Regional Hospital in Corsicana, Texas, but eventually decided to return to the state where he met his wife - Arkansas. "As a Texas guy I really thought I'd end up there for the rest of my career, but I was fortunate this opportunity became available," he said. "I met the fabulous team here which was made up of such good people, and I felt like what they needed, I could provide. Literally on the way back to Texas I called my wife and said, 'start packing your bags, we're moving to Arkansas.'"

A community with heart

Nestled in the heart of Central Arkansas, Saline County has experienced unprecedented growth, with the cities of Bryant and Benton growing nearly 40 percent in 15 years. Healthcare also is a selling point, since the region boasts 54 percent more physicians and 48 percent more hospital beds per capita than the U.S. average. Oncology specialist CARTI and Arkansas Heart Hospital are among the Little Rock providers who've opened satellite offices in Saline County. Only 30 minutes from Little Rock, Saline Memorial Hospital still faces some of the challenges common in rural medical centers. "My charge is to look at ways to deliver big city care in a rural setting, and while we may not have all the resources they do, we do have heart," said Stewart, who was chosen to serve on the American Hospital Association's Rural Healthcare Services Committee for 2021.

Leading amidst a global pandemic, Stewart also is focused on disaster preparedness, tackling everything from viruses to tornadoes. "The challenge is that we don't always know what's coming, but we're promoting an environment where we all work together to be able to handle whatever comes down the pipe," he said. To that end, Stewart has adopted the Peach Tree Leadership Model, popularized by former Tyson Foods CEO Donnie Smith. "It's my team's job to be the roots and trunk of the tree, and to empower and support the branches, or frontline employees, and make sure we're providing resources to support good fruit. Sometimes that's more direct, and sometimes we may not see the fruit or leaves immediately but the trunk is still digging in to weather the storm."

Physician recruitment is another priority for the CEO, who said Saline County is an ideal place for family-oriented clinicians who want to have an immediate impact in their community. Saline Health System currently boasts more than 180 active and consulting physicians, and continues to grow with the community. "Looking back over our lives we often find out we're drawn to one thing but think we want another," he said. "As we get to know physicians I ask them what is it that they want - because if they want big city life, this isn't it. But if they want to be able to practice their profession in a rural setting that respects clinicians tremendously, to be seen as a partner and attend church or PTA with the people they interact with at the clinic, we're the place for them." He also is prioritizing staff education, arming employees with knowledge of what today's patients expect while ensuring the highest quality of care. "Short term, I want to make sure staff are educated and that we can get to where we want them to be, which is a top performing hospital," Stewart said. "As an industry we have so many measures and agencies right now, so my job is to lay out expectations and provide resources to make sure we're viable long-term, and that the decisions we make today put us on a path where we're sustainable for community trust and viability."

Looking forward, Stewart hopes to leave a legacy of impacting the communities he's served, with a recognition that he gave it his all. But despite a myriad of professional accomplishments, Stewart said his greatest pride is his children, Nathaniel and Natalia. "If my wife and I can raise them as productive members of society, that will be my biggest accomplishment," he said. "That is my goal: Making sure they're able to contribute to society and see me as someone who has and continues to contribute to society in a positive way."