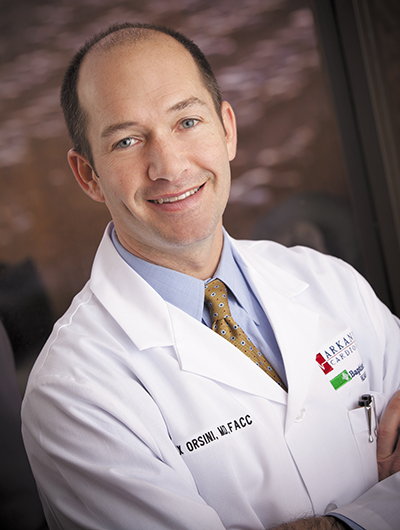 Cardiologist recommends physicians talk to patients about smoking and obesity

LITTLE ROCK--Alexander Orsini, MD, who practices with Arkansas Cardiology, gets great satisfaction from seeing heart failure patients today who have been successfully treated with the ground-breaking medicine Entresto.

"From a purely cardiology point of view, the biggest development we have had in my 21-year career is in medication," Orsini said. "The drug Entresto is our first ground-breaking drug for heart failure in 15 years. It was approved in October 2016. It keeps people out of the hospital and keeps people alive better than any drug we have had before. It is truly a novel, ground-breaking drug. Bad heart failure patients can suddenly breathe, walk and leave the hospital."

He has seen certain patients literally get a new lease on life because of the medication. One is a young woman with a bad heart who was denied a kidney transplant because her heart was not strong enough. Now she has improved enough that she is on the kidney transplant list.

When patients who have had trouble breathing or even walking across the room take the medicine, the results can mean years more of being able to enjoy life. Orsini finds that particularly rewarding.

The other big, single largest development since he has begun practicing is the transaortic valve replacement where aortic values can be replaced with the minimally invasive catheter approach.

"That is the single coolest development of my 21 years of practice," Orsini said. "Historically, we had to open up the chest to replace the valve. If you were old and frail, we couldn't replace the valve and people would die of a bad aortic valve. Now we make a cut in the groin, head up to the heart and replace that valve. We wake them and they can have lunch with their family later in the day and go home the next day. And they can breathe."

He recently had a 90-year-old patient who was dying in the hospital until he went to the cath lab and came out immediately feeling tremendously better.

"He cried afterwards and said, 'I can't believe it. I feel better already'," Orsini said. "We got him through and he went to rehab walking and getting active again. That is a man who a few years ago would have died. Instead, we get to enjoy him for a few more years. That is wonderful."

Orsini developed an interest in medicine early. As a kid, he particularly enjoyed all his science classes. By the time he was in college, though, he knew he wanted more than working in a lab; he wanted to be in a job interacting with people regularly. He finds people fascinating.

He also had a good role model in the family.

"My uncle was a pediatrician," Orsini said. "I followed him around. He had good satisfaction with his job and enjoyed his patients. And I found that the human body is fascinating."

Orsini was born in Fayetteville, and moved to Little Rock when he was three. He graduated from Catholic High School in 1987 and from the University of Arkansas for Medical Sciences College of Medicine in 1995.

At medical school, choosing a specialty proved to be challenging because he loved everything: ear nose and throat, OB\GYN, hematology, etc. But he was especially drawn to cardiology because it provides an opportunity to really help someone while also establishing long-term relationships with patients.

Orsini spends more time in the clinic talking to patients about obesity, smoking and exercise than he does explaining cardiology procedures.

"If cardiologists could stop people from being overweight and smoking, we would be bored and bankrupt," he said.
Do patients listen? Not as much as he would like.

"About half of our smokers quit if we stay after them," Orsini said. "But if you take 100 people who weigh 300 pounds or more, maybe five percent will listen. My success rate is far less than with smoking. Morbid obesity is truly epidemic and it is really hard to overcome."

Still, he recommends family care physicians talk to their patients about obesity. And he does find it especially rewarding when a patient comes in who has been successful in dropping weight.

"When people do listen to you and lose weight, they are so happy," he said. "They come in with a smile and say, 'Weigh me! Weigh me'! It is really fun just to be around them. They are so happy. They breathe better, and may have dropped two or three medications. You can feel their positive energy and happiness. It is very rewarding getting people to drop weight."

Orsini believes the next frontier in heart health will be not advances in cardiology directly, but working on helping people with weight control. More needs to be done to pound in the message of the importance of a low carb diet and exercise.

"That would be the greatest thing we could do cardiac-wise to get our nation eating healthier, moving and not smoking," he said.

Orsini is well regarded by his patients. Debbie Blanton of Okolona, a pharmacist in Arkadelphia, said Orsini has treated several members of her family including herself, her husband, Jim, a retired FBI agent, and his father, James Blanton, who passed away at age 92.

"He and his whole office staff feel like part of our family," Blanton said. "He is very personable and so intelligent, rare but great qualities for a cardiologist. He is very passionate about what he does. He hears every word that you say. He's one of those one-in-a-million guys who can have MD behind his name, but also be a normal person. I just can't say enough about him. He's a treasure to us."

Personally, Orsini stays in shape by jogging. He has been running 5 to 10 miles a day several times a week for about 20 years. His other hobbies are reading, playing the guitar and going to sport activities for his three sons. He and his wife, Angela, who have been married 22 years, have three surviving sons: David, 16, is a swimmer and twins Jacob and Noah, 9, play tennis and basketball.

They lost another son, Michael, who passed away at age 13 months from leukemia. The couple since has established the Michael Orsini Endowment at Arkansas Children's Hospital.