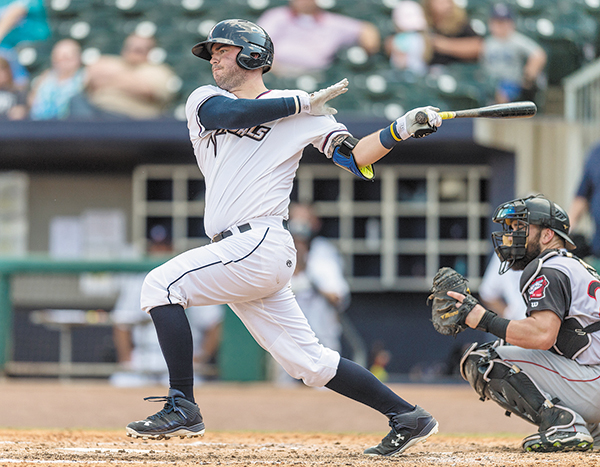 Chris Dougherty, DO, FAOAO, an orthopedic surgeon and sports medicine specialist in Bentonville who is the team physician for the Arkansas Naturals baseball team, was a football athlete himself while at the University of Missouri (UM). When he was injured, his key physician said he had read about the type of procedure Dougherty needed, but had never actually done it. Instead of returning to play football, Dougherty accepted an invitation to work in the UM Department of Orthopedic Surgery under Dr. William Allen.

"It took off from then," Dougherty said, who practices with Agility Centers Orthopedics Clinic. "Ever since then I have always kept up with the largest surgical techniques for sports injuries. If I hear of something that might be good, I take a look at it."

Because it is preferable to prevent injuries to begin with, work with the Arkansas Naturals players has a strong focus on injury prevention and recognition.

"When I was playing college football, you showed up and did your thing," Dougherty said. "Today, they work very hard to take care of the athletes and keep them from being injured. We have learned we can identify patterns that predispose athletes to injury. We look at what could go wrong, and prevent injuries."

Dougherty said using preventive maintenance can identify problems such as being too weak or too tight in one spot.

"There are very specific exercises you can put them on to address those kinds of issues," he said. "We also now have ultrasound not just in our office, but in the dugouts. We can look at an athlete in the dugout and get an idea what is going on. On the rehab side, we check progress with ultrasounds."

The preventive maintenance approach recognizes that these are expensive players.

"If they go down, the club loses money because the athlete is not performing," Dougherty said.

Another huge advance in sports medicine has been on arthroscopic surgeries, such as for the hip, that have in many cases prevented the need for open surgery. Arthroscopic surgery means less pain and a quicker recovery time. Dougherty has seen athletes back on the field ten days after arthroscopy.

Another major advance is in treatment of meniscus injuries in the knee. Surgeons used to trim the meniscus, but then could end up with little left to cushion bone rubbing on bone.

"Now we spend tremendous more time repairing the meniscus because it is so much better to have that cushion," Dougherty said. "If we have a 30-year-old with a meniscus tear, there is so much more we can do today to save and preserve a joint. It is a revolution in the terms of what we do today."

Dougherty has placed exercises/stretching for injury prevention on his you tube channel for his patients to help them with their own injury reduction and recovery. His channel, Dr. Christopher Dougherty, also has videos describing the type of surgical techniques he uses.

"We don't see it so much with the collegiate athlete, but the main problem that we see with high school athletes is overuse," Vander Schilden said. "The problems are usually in the shoulder or elbow and happen usually in the spring of the year when they start practicing and their arms are not in shape to perform the rigors of high performance baseball. Therefore, they develop problems with either the shoulder or elbow. That doesn't happen too much on collegiate level because the training is such that athletes are more in condition to perform the rigors of collegiate baseball."

Vander Schilden said the first thing to be done is to ease off on training and place the patient in a therapy program for either the shoulder or the elbow. If they do not respond to the therapy along with the judicious use of anti-inflammatories, then a referral to a specialist is indicated.

He said especially with shoulders and elbows, the improvements in surgery are quite significant.

"Arthroscopic intervention in the shoulder and elbow have made great strides over the past 30 years," said Vander Schilden, who was a football player and wrestler in his younger years. "Also, the recognition of significant injuries to the shoulder and elbow are far more readily apparent to athletic trainers and the medical team associated with the team. Recognition of the injury is far better, as well as surgical and non-surgical treatment of the injury. Failure to recognize the severity of the injury is particularly a problem in high performance sports. For the recreational athlete, the medical community does an incredible job treating those maladies. But sometimes with the high performance athlete, one is not as much in tune with the significance of the injury."

Trainers are getting more attuned to the recognition of overuse. Vander Schilden said the pitch count limits for baseball have been a great help in preventing problems with younger athletes, as well as collegiate athletes.

"Little League has instituted a very stringent regulation limiting the pitch count to 60 per week," Vander Schilden said. "The pitch count at the collegiate level has also assisted in preventing severe shoulder and elbow injuries. It used to be a team might use the same pitcher all through the game and in multiple games in a week. But that is not allowed anymore. That is one rule that has helped as much as anything in preventing significant injuries to the young athlete."

Vander Schilden's research activities include studying meniscal repair, biomechanics of ligaments and biomechanics of fixation devices. In addition to being team physician of the UA athletic departments in Little Rock and Fayetteville, he is a consultant to the

National Football League, and has served as a team physician for the NCAA wrestling championships, the Arkansas Travelers, and at the Olympic Training Center in 1991 in Lake Placid, New York.