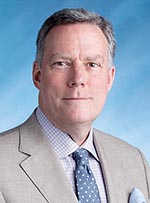 He joins the Arkansas Children's leadership team in a new executive role created to elevate physician leadership and bridge operational, clinical and academic pursuits across the system and state.

Since October 2017, Barr has served as chair of the Department of Pediatrics and associate dean for child health in the University of Arkansas for Medical Sciences (UAMS) College of Medicine, as well as pediatrician in chief for Arkansas Children's and interim president of the Arkansas Children's Research Institute.

He also will hold the Jonathan R. Bates, MD Endowed Chair for Improving Child Health through Arkansas Children's and will remain an adjunct professor in the UAMS College of Medicine.

Barr received his undergraduate degree in animal and veterinary science at West Virginia University in 1984 and his medical degree from the University of Virginia in 1988. He completed his residency in pediatrics at Vanderbilt, continuing his training with a clinical fellowship in pediatric critical care at the University of California San Francisco, where he was also a research fellow in the Cardiovascular Research Institute. While on the faculty at Vanderbilt in 2002 he received a Master of Science in Clinical Investigation. He earned a Master of Business Administration from the University of Massachusetts at Amherst in 2018.