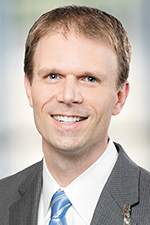 Beaulieu has been an asset to Baptist Health in various finance-related positions during his more than 10 years within the system said Troy Wells, president and CEO of Baptist Health.

Replacing Beaulieu as vice president of finance is Brock Holman, who joined Baptist Health in 2012 as the leader for a newly created Managed Care/Decision Support Department.