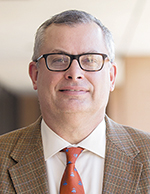 Barnett has an extensive background in health care administration, working for both for-profit and nonprofit health care systems. He most recently was president and chief operating officer of CHI St. Luke's Health-Memorial in Lufkin, Texas.

A Jonesboro native, he was controller for what was then Methodist Hospital in Jonesboro from 1988 to 1995 and was CFO of that hospital, then called Regional Medical Center of NEA, from 1995 to 1999. He also served as CFO at Triad's Northwest Health System in Springdale and at Woodland Heights Medical Center in Lufkin.

Barnett has a bachelor's degree in accounting from Arkansas State University, and he earned an MBA with an emphasis in health care management from Regis University in Denver.