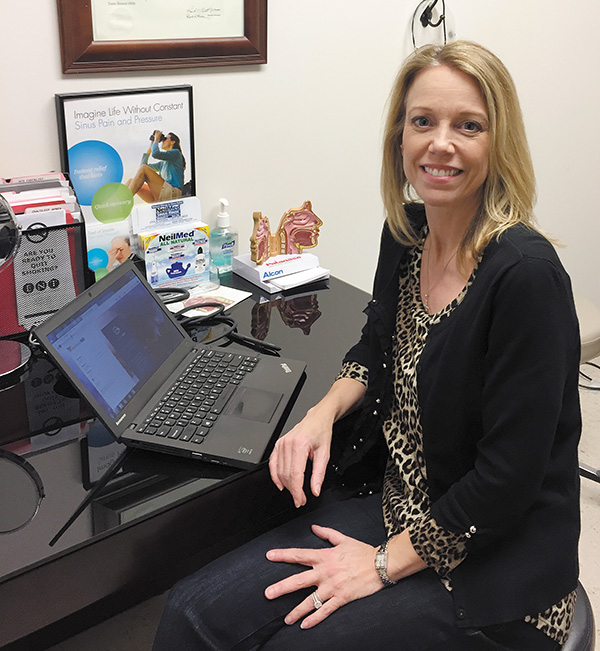 SPRINGDALE--A promising new procedure developed to help adults with eustachian tube dysfunction involves inserting a small balloon into the estuation tube to improve function without having to put a tube in the ear, which is essentially putting a hole in the eardrum.

"Initial research is showing long-lasting results, which is obviously encouraging," said Felicia Johnson, MD, an otolaryngologist with subspecialty/fellowship training in laryngology, who works at the Ear, Nose and Throat Center of the Ozarks. "Potentially, this is a procedure you can do in the office under a local anesthetic, although it can be done in the hospital under general anesthesia, as well. Adults don't always enjoy having a tube in their ear and having to keep water out of the ear. They can't do deep sea diving."

Johnson said the primary advantage of the balloon therapy is that it is a permanent rather than short-term solution like tubes.

Johnson has expertise in treating voice, airway and swallowing disorders. While swallowing is almost an automatic function for most people, problems can develop that make it difficult to swallow.

"We see it in adults a lot more than in kids," Johnson said. "There are a multitude of causes, some age-related. It is well known that swallowing as we get older gets weaker. We lose some of the ease of our swallowing. Sometimes chemo treatments can cause issues - we can see this after neck and spine surgeries. Acid reflux is a common cause of swallowing problems. A lot of that has to do with diet. And medications can cause swallowing problems due to drying out of the mouth and throat, which makes it a lot more difficult to swallow."

Her first step with a patient is diagnosing the problem. If the problem is a medication, she attempts to get the patient off the medicine and back to normal. When the cause is acid reflux, there are medications and dietary modifications.

"If it is age related and after surgery, there is swallowing therapy, swallowing exercises to help you recover from that," she said.

People even develop swallowing problems after a bout with the flu.

"Some patients can develop blisters or severe inflammation in the throat after the flu or other flu-like illnesses," Johnson said.

People don't think about all that goes into swallowing normally until something happens. Johnson said that makes people nervous because they don't want to choke on food and have something go down the wrong way. But no matter the cause, once the inflammation goes down, people usually start to recover more normal function so they don't have to think about it so much.

"It is usually something that will improve with time," she said.

Due to vocal cord nodules, we see young children with voice problems. It is common for singers who can injure their vocal chords. There are age-related vocal chord problems, and diseases like Parkinson's that can affect the vocal cords.

Another really common cause of vocal cord paralysis is the flu or another type of virus. Sometimes the vocal cords will recover on their own with time.

She also treats airway disorders that can include obstructions in the upper airway. Those can be caused by breathing tubes or they can be idiopathic. Remedies might include surgery.

Johnson grew up in Grand Prairie, Texas, and decided early on that she wanted to be a doctor. She went to the University of Texas branch at Galveston for medical school, and did ear, nose and throat surgical residency training at the University of Oklahoma Health Sciences Center in Oklahoma City. She completed fellowship training in Laryngology & Care of the Professional Voice at the Vanderbilt University Medical Center in Nashville, Tenn.

Johnson worked as an attending physician and medical school faculty member within the Department of Otolaryngology-Head & Neck Surgery at the University of Arkansas for Medical Sciences (UAMS). While at UAMS, Johnson directed the residency training program. She has also served as the president of the Arkansas Society of Otolaryngology.

Like other physicians and residents who live throughout the region, Johnson is excited about the recent opening of the new Children's Hospital Northwest.

"I'm going to be working over there with pediatric patients," she said. "I will be on staff there now. It is very nice, a first-rate facility. I was on staff at Arkansas Children's in Little Rock for five years, so I am very familiar with the organization. The children's hospital is something this area has needed for a long time. It will be nice to be able to offer some of the pediatric services that we haven't had."

Johnson became an ENT specialist in part because she likes working with such a wide range of patients from infants to elders. She also finds the intricacies of the neck and throat area to be fascinating.

Johnson and her husband, James Ragland, live in Bentonville and have a son, Evan Ragland. Her main hobbies are gardening and reading. She likes suspense fiction and medical non-fiction books that talk about the latest research.

"I do a lot of reading about brain science concerning what happens to cause Alzheimer's," Johnson said. "It is an interesting subject with a lot of new research. It has affected some of my family, and it is just so prevalent. Incidence rates in the next 20 to 30 years are expected to increase significantly."