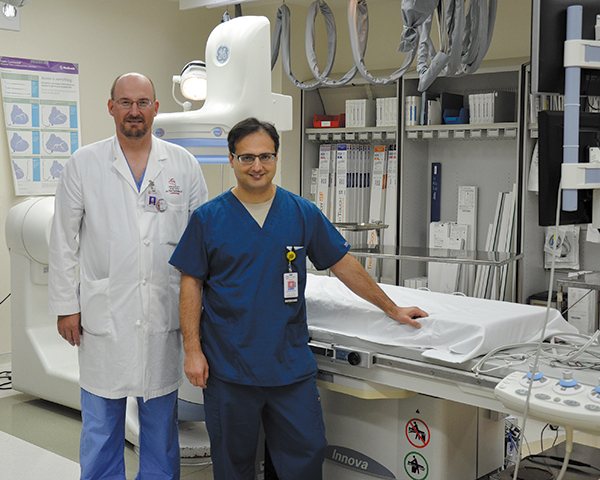 Ronald Kantola, DO, (left) of Arkansas Heart Center, and German Kamalov, MD, of the Cardiology Center at Sparks, recently teamed up for a procedure that's only been done a handful of times in the country.

FORT SMITH--Earlier this year, a patient in Fort Smith needed cardiac resynchronization therapy (CRT) that involves implanting a biventricular defibrillator to treat the delay in heart ventricle contractions that occurs in some patients with a heart failure - weak pumping power of the heart. A delay between the contraction of the right and left ventricles can occur with heart failure, so the walls of the left ventricle are unable to contract at the same time.

The CRT pacing device is an electronic, battery-powered device that is surgically implanted under the skin. The device has two or three leads that are positioned in the heart to help the heart beat in a more balanced way. The leads are implanted through a vein in the right atrium and right ventricle and into the large cardiac vein to pace the left ventricle.

Placing a third lead into cardiac vein sometimes is not possible because of difficult individual anatomy. Generally, these patients are referred to a cardiac surgeon to have the left ventricular lead implanted via incision through the chest wall, or thoracotomy. Unfortunately, some patients are very sick and can not tolerate a cardiac surgery.

German Kamalov, MD, who practices at the Cardiology Center at Sparks Health System, and Ronald Kantola, DO, CCDS, with the Arkansas Heart Center, teamed up to provide an alternative for the patient who was not a candidate for open surgery or the traditional implantation of a left ventricular lead.

The procedure required one physician to gain access to the left side of the heart from the groin while the other doctor worked simultaneously from the chest where the original defibrillator was inserted.

Kamalov, a cardiac electrophysiologist, had studied this approach, but had not performed it. The procedure that required a month of planning was life-saving. It reduced the patient's symptoms of heart failure, and allowed her to avoid an invasive heart surgery.

"It was a challenge, but we were able to combine our experiences to provide a solution for this patient," Kamalov said.

Kantola said to get ready for the procedure, they looked up all the information they could find, which was sparse. There were only a couple of articles from other institutions.

Kantola said that this patient didn't have veins suitable to do the standard procedure. "Typically, she would have needed open heart surgery, but she was not a good surgical candidate," he said. "She had too high a risk of dying. So, in her case, we were able to poke a hole through interatrial septum and implant a lead to left side of heart and didn't have to have open procedure. It was basically like getting a heart failure device. She had no incisions. We used access through her veins like with a pacemaker."

"In many cases, the patient is not a candidate for open-heart surgery, whether it is because of health, age or various circumstances," Kamalov said. "Many of our patients are still in the work force and prefer not to be on a long medical leave after surgery, so there are a lot of benefits to a less-invasive approach, including less blood loss, smaller incisions and a quicker recovery time."

Kamalov said he was inspired to become a cardiac electrophysiologist because the field is both intellectually and technically challenging.

"The physiology of the heart is fascinating and in this field, there are always new advances," Kamalov said. "It's rewarding to be a part of such a growing field and be able to have a positive impact on someone's quality of life."

As a cardiac electrophysiologist, he treats a lot of patients in Arkansas with atrial fibrillation (AFib).

"AFib is the most common kind of abnormal heart rhythm and becomes more common as we age," Kamalov said. "There are several risk factors such as high blood pressure, diabetes and heart disease commonly found in residents of this area that contribute to a growing rate of patients experiencing AFib. Some may not even know they have it. But the longer a person is in AFib, the higher their risk of experiencing a blood clot and subsequent stroke."

Kamalov also performs ablations of atrial and ventricular arrhythmias, implantation of pacemakers and defibrillators, and the extraction of infected or malfunctioning leads of these devices.

Kantola received his medical degree from Oklahoma State University College of Osteopathic Medicine in 2000 and has been practicing cardiology in the Fort Smith area for more than 11 years. Kamalov received his medical degree from Yerevan State Medical University in Armenia and has been in practice for more than 20 years. He joined Sparks in October of 2014 as the area's only cardiac electrophysiologist and since then has performed many procedures to treat and correct heart rhythm irregularities that were not previously available in Fort Smith.