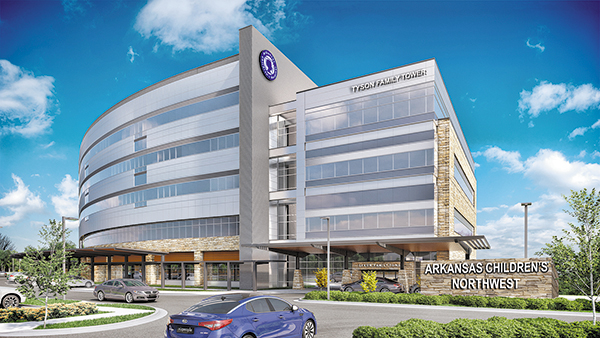 Some of largest current construction projects in the state are healthcare facilities, such as the new $100-million Arkansas Children's Northwest (ACNW) in Springdale and the Baptist Memorial Hospital-Crittenden County Hospital under construction in West Memphis at an estimated cost of more than $25 million.

Trisha Montague, senior vice president and chief administrator for ACNW, said they are on track with the construction plan and anticipate being completely closed in by March. 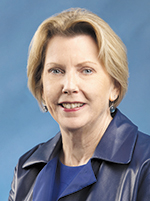 "This is critical in that, fortunately, we haven't had significant inclement weather impacting construction," Montague said. "Arkansas Children's Northwest is proceeding with the next step regardless of the weather. We are moving quickly and aggressively so ACNW will be open during the January flu season-a time when children need emergency and clinical care most-in 2018."

Closing in the facility will allow work to proceed on drywalling, plumbing, electrical, heating, ventilation, etc. - the basics you see in any major building construction project.

Montague said the project is believed to be the largest current construction project of any kind in Arkansas.

"The ACNW project has between 200-250 Nabholz construction workers," she said. "When it opens, ACNW will create 270 new jobs. Currently, we are looking for team members from the Northwest Arkansas community specifically and also employing national recruiting for some specialty positions. For more information, visit http://www.archildrens.org/careers/open-positions/nwar-positions or call 479-750-0125 ext. 290."

Construction began in late 2016 on the new Baptist Memorial Hospital-Crittenden County Hospital. That facility will replace the Crittenden Regional Hospital that closed in September 2014 leaving more than 400 people out of work. That closing caused a major blow both to healthcare and the local economy.

Crittenden County taxpayers voted to approve a one percent, five-year sales tax that is expected to generate about $25 million for the hospital. The 50,000-square-foot hospital is expected to open in early-to-mid 2018. 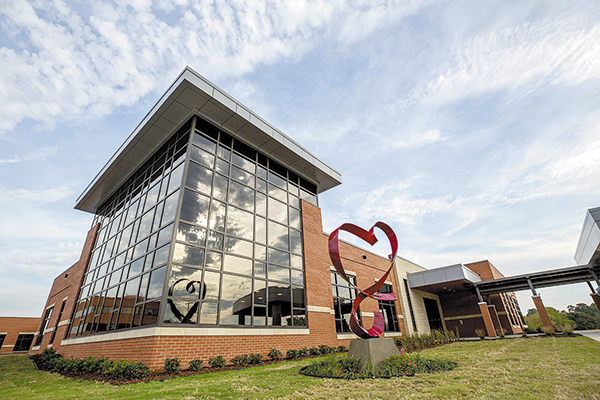 "We are incredibly proud to bring this important addition to the Hot Springs area and surrounding communities," said Jerry Mabry, CEO of NPMC. "We are committed to expanding healthcare services to the areas that we serve, and by expanding our emergency department and adding a standalone Heart and Vascular Center, we are increasing access and efficiency to healthcare in our areas."

The expansion project began in November 2014 with a groundbreaking. The investment thus far has been estimated at more than $25 million, and additional investments are planned for the renovation of existing hospital space.

Another big project was completed when the 50,000-square-foot Baptist Health Women's Center-Conway opened in early February. The $20-million facility was constructed with the help of GSR Andrade Architects, Bernhard TME Engineering and CDI Contractors.

"This is yet another exciting milestone on this new campus as we continue to add services for our patients," said Joanie White-Wagoner, vice-president and administrator of Baptist Health Medical Center-Conway. "We've not only built a beautiful facility that will make every family proud, but we're introducing laborists to our community taking delivery of babies to another level of care."

A laborist is a board-certified obstetrician who is on-site and available 24 hours a day/7 days a week. The laborist can evaluate the progress of an expectant mom's labor and react to any complications if needed. This constant presence makes childbirth safer for women and babies.

"As a laborist in Little Rock, I've seen firsthand how this program has saved lives, and I'm so honored to be able to be a part of this new delivery of care for the Conway community," said Dr. Richard Wyatt, a board certified obstetrician and laborist.

Other amenities include two Jacuzzi tubs to ease the discomfort of the labor process. However, water births will not be performed. SMART beds and integrated digital signage outside the patient rooms, both used in the medical center, will be also be used.

Another major investment in healthcare is the $22-million Arkansas Specialty Orthopaedics facility that is being constructed at the southwest corner of Fair Park Boulevard and Interstate 630 in Little Rock. Construction began in February on the 75,000-square-foot, three-story facility for the group that has 20 doctors and employs about 300.

Arkansas Urology is building a 12,467-square-foot ambulatory surgery center expected to open this fall. The center represents a $6 million investment by the physician partners of the clinic. Arkansas Urology will be providing state of the art technology in this new facility adding several new procedures to treat BPH (enlarged prostate), overactive bladder and prostate cancer.

"As more urological procedures become outpatient based, this center will be able to offer integrated care with one-stop care to include labs, radiological procedures, physician interaction along with interventional procedures," said E. Scot Davis, CEO of Arkansas Urology. "The building will house two, 450-square-foot operating rooms and four procedure rooms. It will be an accredited facility to ensure safety and quality standards."