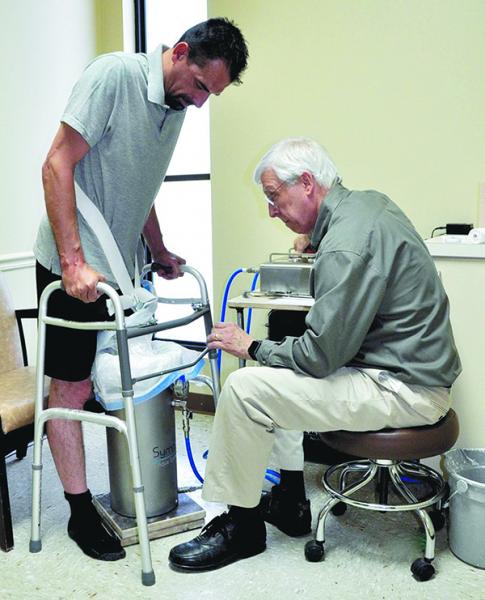 The new Symphonie Aqua System uses a pressurized hydraulic chamber and a vector control pump to capture the shape of an amputee's residual limb under weight-bearing stresses.

The ability of lower limb amputees to succeed actively with a prosthesis has been largely dependent on the intimate fit of their residual limb within the prosthesis socket--especially during walking or running, when it must bear the full weight of the wearer's body. A recent innovation in the method by which prosthetic sockets are fitted is making a globally-recognized difference in comfort, adhesion, and control that is now available to prosthesis wearers in Arkansas -- currently one of only 17 states to have gained access to the new technology.

Called 'a revolution in impression technology for prosthetic sockets,' the Symphonie Aqua System was conceived by Andreas Radspieler, a German orthotic and prosthetic clinician working with patients in his own practice, and developed through Romedis GmbH, based in Neubeuern, Germany.

The Symphonie Aqua System uniquely uses water pressure to measure the three-dimensional changes in form and shape a residual limb undergoes during full weight-bearing. It's the first time prosthetists have been able to determine the residual limb's burden within the prosthetic socket under actual conditions, and to capture an accurate plaster-cast impression of the individual's body weight and tissue contours under weight. From this custom mold, a precise and more perfectly fitted socket can be created than has ever before been possible, Radspieler claims.

The originality of his concept, and its significant value to individuals with lower limb loss, earned Radspieler the 2017 German Federal Innovation Prize.

During a recent visit to Little Rock, Radspieler described his decision to choose a water-based approach to creating a more comfortable socket.

"Socket fit is vital to the comfort, suspension, control, and acceptance of a lower extremity prosthesis," he said. "With traditional casting methods, it is impossible to accurately capture a limb under weight-bearing conditions exactly as they would be inside a prosthetic socket. Air pressurized concepts for measuring a limb under weight-bearing conditions have been on the market for 20 or 30 years, but air is just too compressible as a medium. Anyone who has used a bicycle pump knows that it takes a lot of pumping with your thumb over the hole before you feel some resistance. I thought that since water is incompressible, that might be a better medium to choose -- and water is available everywhere."

The patient's residual limb is hand-cast in the standard manner by wrapping it with bandaging strips covered in wet plaster, which capture the shape of the limb they encompass. The patient then immerses the limb in the Symphonie hydraulic chamber, shifting their full body weight onto a gel bladder suspended in the fluid.

Paired with its vector control pump, the chamber can be custom-pressurized for each patient, using the Symphonie VC app readings on a smart device. Readings are based on the patient's weight, size of the stump, firmness of the connective tissue, and the athleticism of the patient.

Under the compression of full weight-bearing within the custom-pressurized chamber, the limb and its plaster cast assume the weight-bearing shape that is later duplicated when fabricating a matching prosthetic socket from that mold.

The full contact and weight-bearing that the patient experiences during the casting process also provides proprioceptive feedback to the patient, who can then give the practitioner valuable information concerning bony and sensitive parts of the limb before the socket is made, often eliminating the need for cast modifications or multiple test sockets.

Arkansas amputees who have been prosthetically fitted using the system report consistently better results, noting the absence of bone discomfort previously experienced, and a more secure fit that enables confident participation in high activity sports such as martial arts.

An inventor by nature, Radspieler had previously designed new concepts, built prototypes, and acquired patents -- then sold the technology to investors to develop and market. This time, however, he recognized the potential of this unique method of applying hydrostatic pressure to socket design, and developed the concept himself, producing prototypes used to benefit his own patients, and investing in CAD technology, machining and milling equipment for his new venture. The first system was assembled in March 2015.

A friend asked to try out an Aqua System model at his own O&P business, reported phenomenal results, and bought one two weeks later. Word spread largely by grapevine and word of mouth, until Radspieler's small start-up company had sold 100 systems during its first year--far more than anticipated. Today, in less than three years, the Symphonie Aqua System has been used to fit more than 16,000 patients worldwide, from Beijing to New Brunswick to Melbourne, Australia.

A new digital version of the system premiered in May in Leipzig, Germany, "capable of providing a 3-D animated full-volume model of the residual limb that can go directly from scanning the weight-bearing residual limb within the Aqua System to a manufacturing process like 3-D printing," Radspieler explained.

"The future of prosthetics will definitely be in a different kind of manufacturing process," he believes, "and for that future, we will need a digital file of the residual limb at full weight-bearing."

The Symphonie Aqua System is in use in Arkansas at Little Rock-based Snell Prosthetics & Orthotics, www.snellarkansas.com.