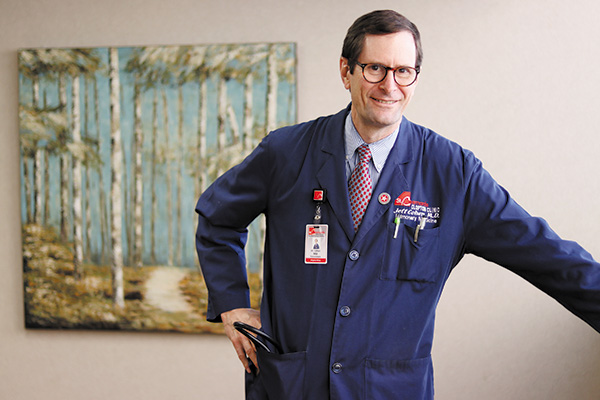 The adult obesity rate in Arkansas is 35 percent, and is the primary cause of sleep apnea in about 90 percent of the cases. So, it is no wonder that Jeffrey Cohen, MD, a pulmonologist who specializes in sleep medicine at St. Bernards Clopton Clinic in Jonesboro, estimates that about 20 to 25 percent of patients seeing a family doctor regarding insomnia have sleep apnea.

"If I was talking to a group of family doctors, I would tell them sleep apnea is rampant," Cohen said. "It is very subtle. People live with it for decades before they come to my attention. A great screening question to ask people is, 'Do you fall asleep watching TV?' Another screening question is, 'Do you wake up in the morning just as tired as the night before?' Those are indications for inadequate rest. If they report unrefreshing sleep, it is usually sleep apnea."

Often someone with sleep apnea will say they sleep fine, but don't feel rested. People will resist going to the sleep doctor because they think they don't have a problem.

There is also something known as paradoxical insomnia. Someone perceives minimal sleep. But if you measure their sleep objectively, they sleep a lot more than they recognize. Cohen said those people typically are not tired all day because they got plenty of rest the night before.

Probably everyone has occasional insomnia, less than once a week. Approximately five to ten percent of the population has chronic insomnia.

When Cohen first sees a patient, the first he does is to confirm insomnia. There are some conditions that mimic insomnia like sleep apnea or delayed sleep phase syndrome.

"If I suspect sleep apnea, I would do either home sleep testing or sleep testing in a lab," Cohen said. "So, for a medical audience, I would want them to know the indications for a home sleep test are for a high probability of sleep apnea. You have to think they have sleep apnea before you order that test. Sadly, many insurance companies will only pay for a home sleep test. There are several types of devices used. Our particular device we like is a wrist mounted remote sensor pulse oximeter with plethysmography that will measure the cyclical variation of the peripheral arterial tone, the oxygen level and that heart rate. The peripheral arterial tone will vary, their pulse rate will vary and frequently their oxygen levels will drop."

That home test compares to a lab sleep study where many more variables are observed.

Some of the sleep medicines are contraindicated with sleep apnea. Sedatives make sleep apnea worse. Alcohol makes it worse.

Treatment for sleep apnea could be a CPAP mask that blows a steady stream of pressurized air through a mask into the respiratory system, or a dental device. Surgical options are used much less often.

Sleep apnea is associated with hypertension and is a risk factor for heart disease and strokes.

"For that reason, it should be treated if it is severe enough," Cohen said. "But it is hard to get people to treat sleep apnea unless they feel better with the treatment. The mask is a bit of a hassle. Unless you see a good reason to do it, you just wouldn't."

"Sometimes we are talking about 150 pounds or more," he said. "Someone who is 400 pounds might have to lose 230 pounds. For that person, it is almost unattainable. If someone is 250 pounds, weight loss is a reasonable alternative treatment if they can do it."

For someone with onset insomnia (can't go to sleep initially), he would not order a sleep test. In that case, he would talk to the patient about good sleep hygiene habits like not napping in the day, and avoiding stimulants like caffeine, cigarettes or rich, spicy foods before bedtime.

You don't want a large dose of sunlight before bed as bright light late in the day can alter how you sleep. You want to make sure your sleep environment is pleasant, dark and that you have a comfortable bed.

Other causes of insomnia can be anxiety disorders, PTSD and depression. If Cohen detects those sorts of thing, he recommends Cognitive Behavior Therapy for Insomnia (CBT-I) and counseling.

"If someone is depressed, you have to treat the depression or they just won't get better," Cohen said. "It is similar for anxiety disorders; people just don't get better without treatment. People are resistant to getting that diagnosis or treating it. I think some insurances don't pay much for things like counseling."

There is an effort among the sleep community to make CBT-I more available.

One phone app he recommends for CBT-I is put out by the Veterans Administration, https://mobile.va.gov/app/cbt-i-coach. Cohen said this type of online tutorial could be helpful for people engaged and intelligent enough to understand it. You have to be self-motivated.

The American Association for Sleep Medicine advises against the chronic use of sleep medicine instead of treating depression and anxiety primarily. Cohen does not prescribe sleep medicine much to patients. Typically, he would refer the patient to the family doctor for chronic treatment.

Some patients report that sleep medicine works initially, but then becomes less and less effective. Others find the medicine helpful and don't have any contraindications for long-term use.

Cohen rarely prescribes benzodiazepines for anxiety-related insomnia, even though he thinks there can be a use for them.

"I would be fearful my patients would lean on it and not treat underlying causes, which are depression and anxiety," Cohen said. "If the patient's psychiatrist suggested benzodiazepines, I would have no problem with them. I would avoid using a benzodiazepine in someone without psychological cause."

Cohen graduated from the University of Arkansas for Medical Sciences and did his residency at University of Michigan and his fellowship at Vanderbilt University Hospital in Nashville, Tenn.