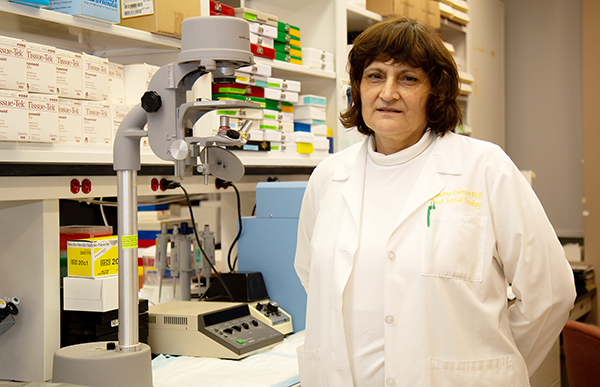 One of the greatest risk factors for cancer is age. People who live longer are more likely to get cancer. Unfortunately, some undergo chemotherapy and win the battle against cancer, only to die from heart-related damage resulting from cancer treatment.

That tragic outcome is one reason why there is excitement about recent research at the University of Arkansas for Medical Sciences (UAMS) showing promise for using the muscle-relaxant drug Dantrolene to prevent damage caused by the chemotherapy drug Doxorubicin.

The UAMS team led by cancer researcher Valentina Todorova, PhD, published the findings in a research paper published in the February 2020 issue of the scientific journal Translational Oncology titled, "Dantrolene Attenuates Cardiotoxicity of Doxorubicin Without Reducing its Antitumor Efficacy in a Breast Cancer Model."

Todorova, an assistant professor in the UAMS College of Medicine, Department of Internal Medicine, said the side effects from cancer treatments can appear during treatment, after treatment or sometimes many years later.

"We are looking at new ways to prevent this damage from occurring, specifically in breast cancer patients," said Todorova, who has been a cancer researcher for 20 years and has been involved with publishing approximately 50 studies. "Typically, the damage starts as cardiomyopathy, which makes it harder for the heart to pump blood. This can then lead to congestive heart failure."

Doxorubicin is the most common and widely-used chemotherapy drug. In addition to breast cancer, Doxorubicin is commonly used alone or in combination with other drugs to treat many other types of cancer including bladder cancer, stomach cancer, colon cancer, Hodgkin and non-Hodgkin lymphoma, leukemia and others types of cancer.

Todorova said the preliminary study that looked at the combination of Doxorubicin and Dantrolene in rats is very promising, but a lot more research is needed before clinical trials start in humans. The main action of Dantrolene is to reduce the abnormal calcium concentration in the muscle cells induced by Doxorubicin. Dantrolene also reduces oxidative stress associated with Doxorubicin treatment.

"There is a long road ahead to use Dantrolene to potentially reduce or prevent heart damage," Todorova said.

Todorova gave a lot of credit for the work to teamwork between clinicians and scientists at UAMS. "It is a big team," she said.

One of those team members is Jeanne Y. Wei, MD, PhD, UAMS Jackson T. Stephens Professor of Geriatrics and executive director of the Reynolds Institute on Aging. Wei said one reason the research into reducing heart-related impacts from chemotherapy is the older a patient is, the more likely the patient is to have experienced cancer. And a treatment that cures one type of cancer might make the patient subsequently at a higher risk for second, different cancer.

Wei said other organs besides the heart can be harmed from chemotherapy.

"In this case we are interested in trying to ameliorate heart damage following chemotherapy and\or radiation in older patients, especially those with breast cancer," Wei said, a board-certified cardiologist. "Older women who get Doxorubicin treatment have a four-fold higher risk of dying from heart disease because of age-related changes and sustained damage to heart tissue. Up until now, there have not been many promising ways to treat them. To confound this difficulty, we didn't have a way to predict who might or might not be able to tolerate some of these effective chemo drugs."

Since the impacts sometimes may not manifest for ten to 20 years, even children treated with chemotherapy might later experience heart failure.

"That doesn't mean it is fatal, but the heart has more difficulty keeping up with increased demand such as what occurs with fever or other acute illnesses," Wei said. "The likelihood of sustaining heart failure - the inability of the heart to keep up with demand - is much higher with people who have had chemotherapy because of the drug's select effect on muscles. It damages the mitochondria so severely that it causes total havoc in the muscle cell. We hope in the future that by reducing the damage, even a little, that it will go a long way in protecting patients."

Wei said more research needs to be done on the animal model before starting drug trials with people.

"People who take new treatments that come to the market too soon may sometimes end up on the back end with a lot of complications," Wei said. "We just want to be careful and understand the correct dosage and be sure that there aren't other undesirable side effects."

This research was funded in part by the Arkansas Breast Cancer Research Project established in 1997 by the Arkansas General Assembly to research the cause, cure, treatment, early detection and prevention of breast cancer.

For more information, click here and learn how research at UAMS shows potential to reduce chemo-related heart damage at