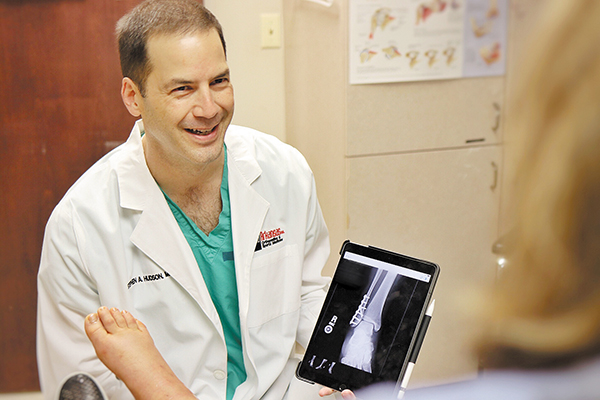 It might at first seem unlikely that orthopaedic surgeries for hip and knee replacements would be done on an outpatient basis. While that hasn't happened in Arkansas yet, it will very soon, said C. Lowry Barnes, MD, professor and chair of Department of Orthopaedics at the University of Arkansas for Medical Sciences (UAMS).

"More hip and knee replacements will be done as outpatient surgery," Barnes said. "It is not risky or we certainly wouldn't be doing it. We will do it for patients for whom it is appropriate, maybe up to 60 percent of hip replacements and 60 percent of knees."

Barnes said advantages to outpatient surgery for joint replacement include patients being able to go home, sleep in their own beds and be around loved ones.

"From a medical standpoint, you are in your home environment," Barnes said. "You are used to bacteria in your own home, but may not be used to bacteria elsewhere. Outpatient surgery may be safer and it may be less expensive, too. We will look at a lot of criteria to see who should and should not be operated on as an outpatient including past medical history, body mass index, whether the patient is a diabetic and, if so, how well controlled and whether the patient has had a previous problem with an anesthetic."

"Years ago, when I was in training, most ACL reconstructions and rotator cuff repairs were inpatient procedures primarily for pain control after the surgery," Hudson said. "Now both of those surgeries are routinely done as outpatient surgery and it is extremely rare for someone to be admitted after surgery."

"Methods like intraarticular 'joint cocktail' injections at the end of the procedure have really revolutionized pain control after joint replacement," Hudson said. "Most of my hip replacement patients are routinely going home the next day after surgery with their pain well controlled overnight after surgery. In select patients, with the right education on what to expect after surgery and appropriate ways of treating their pain, many could go home the day of surgery. We are working on this currently."

Barnes said it is unusual now to give an IV narcotic after surgery.

"When you give people narcotics, it increases the risk of nausea and vomiting, poor respiratory control and getting pneumonia or other issues," Barnes said. "Without narcotics, patients are more clear thinking and likely to take other medicines correctly. They are less likely to fall."

Barnes said while all patients have some pain after a hip or knee replacement, the pain is very manageable.

"This is one of the most popular operations in the U.S because it works so well," Barnes said. "Patient satisfaction scores on the orthopedic floor at UAMS are the highest in the country and we don't use much narcotic. If patients were hurting, they wouldn't rank UAMS so high in patient-satisfaction rates."

Hudson said the people he sees with opiate addiction problems are not the traditional "addict" that one would picture of trying to get drugs for the "high."

"More commonly, I see people that have some chronic problem, such as arthritis, and they have been placed on opiates," Hudson said. "They are then habituated to them and use them to get through the day. We know that chronic opioid use actually lowers one's pain threshold, so then it is even harder for someone to stop taking them. We try to steer patients toward other ways of dealing with pain, such as physical therapy, NSAIDS, staying active and keeping a healthy diet. People are busy, we start having some pain, we start avoiding activities, our diet may not be the best, and it is tempting to look for an easy solution - a pill to make us feel better. But many studies point out that people do far better long term by staying active, and keeping a healthy, balanced diet."

Infection is always a risk for anyone having surgery, and is of particular concern because if a joint replacement becomes infected, it commonly will require removal of the joint in order to fully resolve the infection.

"This causes significant hardship and disability for the patient as well as taxing the health system," Hudson said. "Orthopaedics has focused on decreasing infection rates for years with things like laminar airflow and body exhaust suits for the surgeons and recently with newer postoperative dressings to try to reduce the risk. What is becoming more apparent in studies is that there are many patient factors that may be more important for reducing infection risk than what we are doing in the operating room. We know that poorly controlled diabetes, smoking, MRSA colonization, and obesity can significantly increase the risk of infection. We are being much more intentional about working on these modifiable risk factors before proceeding with surgery. We will more often 'pause' before proceeding with surgery in order to get these factors under better control before proceeding. I tell my patients they are better off with an arthritic joint than with an infected total joint."

Barnes said post-operative infections for joint replacements are rare, and that is because of advances in infection control that include all of the operating team being dressed in body enclosure suits, and specific protocols for preparing a patient for surgery. In the past, patients used to be shaved, but that could cause skin damage that would pre-dispose a patient to an infection. Now hair is removed with clippers. They even avoid operating if a patient has inflamed insect bites near the surgery site.

Another method to prevent infection is testing patients prior to surgery for staph infections, particularly Methicillin-Resistant Staphylococcus aureus (MRSA). Barnes said the less than five percent of patients who test positive for MRSA are given a different type of antibiotic at the time of surgery.

Also of importance is doing the operation in a timely manner so the wound is not open longer than necessary, and using a dressing after surgery that is not removed for a week to reduce the risk of contamination. Barnes said due to all those measures, their infection rates remain less than one percent.

Another issue of concern is the availability of orthopedic surgeons to meet the demand for joint replacement that has resulted from the aging baby boomer population.

"We hope to soon expand from four to six residents per year in orthopaedic surgery," Barnes said. "And as our population ages, more total joints are being done, we will have to look at modification to delivery."