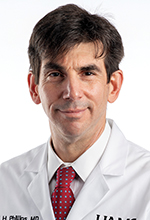 LITTLE ROCK - Paul H. Phillips, M.D., has been appointed chair of the Department of Ophthalmology in the College of Medicine and director of the Harvey & Bernice Jones Eye Institute at the University of Arkansas for Medical Sciences (UAMS).

Phillips was chosen after a national search was conducted to succeed Westfall, who stepped down as chair of the department in August 2018 to become dean of the College of Medicine.

Phillips was recruited to UAMS in 1997 and has held the rank of professor since 2008. He has served as chief of pediatric ophthalmology at Arkansas Children's Hospital since 2006 and as director of the Ophthalmology Residency Program since 2015. He became the inaugural holder of the Stella Boyle Smith/Gissur J. Petursson, M.D., Chair in Ophthalmology in 2009.