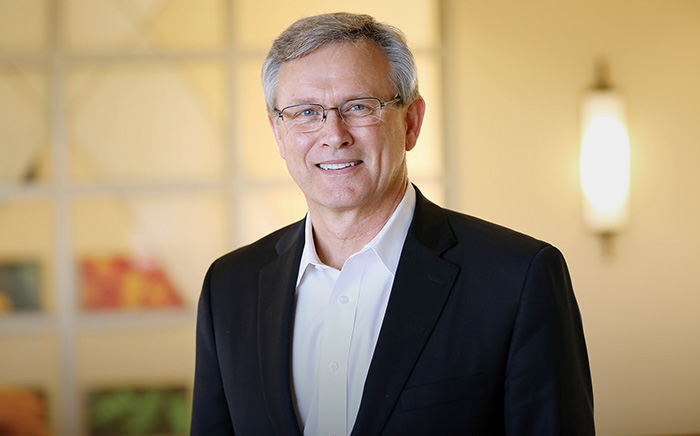 Meeting the needs of patients in the fastest growing part of the state is no small feat, but it's one Steve Goss, MD, is committed to. Today, the president of Mercy Clinic of Northwest Arkansas is leading a network of 260 providers while bringing innovation and services to families and employers in Northwest Arkansas.

The road to medicine

A native of Pine Bluff, Arkansas, Goss's first exposure to medicine was veterinary care. "Growing up I was always interested in sciences, and as a kid thought I'd be a chemist," he said. "But we also lived on a small farm and took care of lots of animals, and I became interested in their care along the way." Goss soon grew interested in caring for people, and attended Ouachita Baptist University before earning his medical degree from the University of Arkansas for Medical Sciences in Little Rock, where he also completed his residency training in internal medicine and pediatrics. In 1987 the young physician arrived in Bentonville and joined St. Mary's Hospital, which was acquired by St. Louis-based Sisters of Mercy Health System in 1995. Following years of private practice and service on hospital leadership and advisory boards, Goss made the move to executive leadership in 2003, providing oversight to the system's 40-plus providers. Today, he oversees a network of more than 260 providers across Mercy Northwest Arkansas.

"I'm thrilled to have had the chance to take care of people, but part of the reason I accepted this role was the opportunity to affect more people in a region where I couldn't do that one-on-one," said Goss, who still sees patients one day a week at Mercy Clinic Primary Care - Moberly Lane. "In recruiting physicians I can take pride in knowing many more patients are being cared for in a spirit that aligns with my own faith. Being a part of building this integrated group has been a privilege and a joy." He attributes his success - and the system's growth - to the commitment of coworkers and providers to Mercy's Christ-centered mission. "It's something that attracted them to work for us," he said. "We're not perfect, but we hear from patients in and out of our facilities that they can feel that difference because it's what we're all about. How and why we do what we do is a distinguishing factor because of our collective culture."

Rising to the challenge

Goss said the region's rapid growth has presented a unique challenge to the medical community in both recruitment and reimbursement. "Arkansas's Medicare reimbursement rate is the lowest in the country," he explained. "We've learned to be pretty lean along the way, but have delivered on great quality metrics at the same time. Trying to do that in a region that's growing so rapidly puts even more pressure on a system when you start adding providers and equipment. It can be a real conundrum, but we also have a productive group of providers and we pride ourselves on working hard, paying close attention to cost and trying to be proactive in getting out in front of things and not swept over by them. We're always pressing ourselves to do things differently." For Mercy, doing things differently includes a focus on virtual care and risk-based contacts - both proven to bolster outcomes as well as reimbursement. Currently, 40 percent of the system's income is generated by risk-based contracts, making Mercy health system the largest ACO provider in the country. The proactive population health focus adopted by today's accountable care organizations means patients are more likely to receive preventive care screenings like mammograms, colonoscopies and blood pressure and cholesterol checks. Goss said the collective approach to patient care also means providers are thinking beyond the doctor's office. "We're more interested now in how well people are doing outside of the clinic," he said. "Population health is trying to align all those things much better by paying attention to what's happening at home. These ACO contracts are a way to increase reimbursement while working in that direction."

Mercy Northwest Arkansas also is exploring the future of artificial intelligence and robotics, which Goss considers instrumental in the face of a looming healthcare workforce shortage. "There's an estimate that by 2030, 30 percent of clinical roles will be vacant because of a lack of workforce," he said. "We're working hard to try to solve for getting work done, and technology has to be a large part of that solution." Mercy's internal medicine residency training program through UAMS is another notable accomplishment, said Goss. The program graduated its first class in 2019, and Goss looks forward to continued growth through UAMS and partnerships with the Northwest Arkansas Council. He also hopes to address a regional shortage of specialty providers, but recognizes the answer lies beyond one system. "We may have to solve some of those challenges regionally, and work together to provide a great specialty service that's not owned by any one clinic," he said. Looking forward, Goss hopes to optimize the system's growth by building on their 5-star CMS rating and recent ranking as a Top 100 Hospital by IBM Watson Health. "Staying on top of our game doesn't came easy and it can slip away if we're not paying attention," he said. "Everything we do is about delivering quality patient care with compassion, and that's more than words on paper to us. We're always looking for likeminded providers because our mission is the core of patient care, and we're committed to staying true to our values."