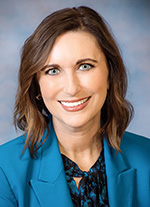 LITTLE ROCK - Rebecca Pittillo, a regional executive for Arkansas Blue Cross and Blue Shield, has been named associate executive director of the corporation's charitable nonprofit, the Blue & You Foundation for a Healthier Arkansas.