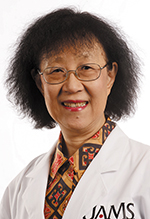 She built a Council on Education for Public Health-accredited Public Health Program, ushered in next-generation sequencing and big data science, and brought in close to $40-million extramural funding for research and infrastructure advancement to the university.

In 2011, she was appointed director of Cincinnati Cancer Center and later named the Hayden Family Endowed Chair for Cancer Research. She led consortium members in the Cincinnati Children Hospital Medical Center, UCHealth, and the University of Cincinnati work towards the goal of attaining NCI designation. Her national and international network runs deep and broad. Her passion in promoting inter-/cross-institutional research is reflected in her proven record of building discipline-diverse teams that serve the larger scientific community well in the nation.

Her global perspectives and interests is a unique strength for her success as an institutional builder across national boundaries, enjoying productive international research collaborations in multiple countries including Canada, Czech Republic, Denmark, China and Sweden. In total, Ho is a champion for trans-disciplinary collaboration and cross-institutional partnerships, and a true believer of "the whole is always greater than the sum of its parts."

Ho received her bachelor's and doctoral degree from the University of Hong Kong. Her research interests pertain to the role of hormones and endocrine disruptors, and the interplay between genetics and epigenetics, in disease development as well as how early-life experiences can be a root cause in later development of cancers, asthma, neural disorders and other complex chronic diseases. Her work - published in more than 240 articles - has pioneered the fields of environmental epigenetics and developmental origins of adult disease.

Past president of the Society for Basic Urological Research, Ho is active in the American Urologic Society, Endocrine Society, Society for Basic Urologic Research, Society of Toxicology, and American Association for Cancer Research. She chairs countless scientific reviews and policy committees for the National Institutes of Health and the U.S. Department of Defense. She is a former member of the Integration Panel of the Department of Defense Congressionally Directed Prostate Cancer Research Program and the National Academy of Science Committee of Emerging Science for Environmental Health Decisions. Ho serves as a charter member of the National Advisory Environmental Health Sciences (2016-2020) and a member of the External Expert Panel for the O'Brien Urology Research Centers (U54).

In 2007, the Ohio Senate, during its 127th General Assembly, recognized Ho's research linking chemical exposure while in the womb and prostate cancer development later in life as an Outstanding Achievement and honored her as one of Ohio's finest citizens. She also received the Women in Urology Award from the Society of Basic Urologic Research and the Society of Women in Urology in the same year. Ho won the first Mentor of Excellence Award from the Prostate Cancer Foundation in 2013. She was recognized by the University of Cincinnati with the 2015 George Rieveschl Award for Distinguished Scientific Research, and by the College of Medicine with a Lifetime Achievement Award. In 2017, she also received the Daniel Drake Medal, the highest honor awarded by the College of Medicine based on outstanding achievements in biomedical science.