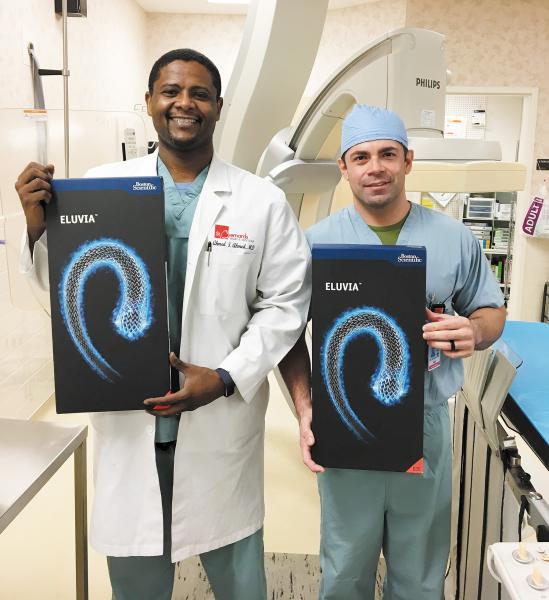 JONESBORO - Physicians at St. Bernards Medical Center became the first in the state of Arkansas to implant the Eluvia™ Drug-Eluting Vascular Stent System, specifically developed for the treatment of peripheral artery disease (PAD). St. Bernards is only one of 20 hospitals in the country currently implanting the Eluvia.

Dr. Max Arroyo and Dr. Ahmed Ahmed, cardiologists at St. Bernards, implanted the stent, which was specifically designed to treat blockages in the arteries (often referred to as PAD) of the lower extremities.

This stent system allows the patient to receive sustained drug release over an extended period of time, providing treatment directly at the blockage site.

The Eluvia stent, developed by Boston Scientific, utilizes a drug-polymer combination to offer sustained release of the drug paclitaxel for a one-year timeframe, designed to prevent tissue regrowth that might otherwise block the stented artery.

Approximately 8.5 million people in the United States are affected by PAD, which occurs when fatty or calcified atherosclerotic material, called plaque, builds up on the walls of the arteries of the legs, restricting blood flow and causing pain, swelling and a diminished quality of life. If blood flow is not restored and maintained, severe cases of PAD can lead to pain, ulcers and even amputation of the affected limb.