Violence in U.S. Emergency Departments on the Rise 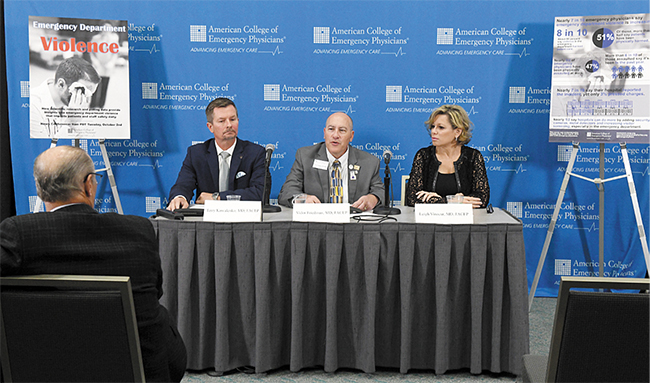 By their very nature, emergency departments are high-stakes settings filled with vulnerable patients and frightened families. Increasingly, they are also high-risk settings for healthcare providers, staff and patients.

Last fall, the American College of Emergency Physicians released data and insights into the rising violence in U.S. Emergency Departments. In a poll of more than 3,500 emergency physicians nationwide, nearly seven in 10 said ED violence is increasing, and nearly eight in 10 said the violence harms patient care.

"More needs to be done," said ACEP President Vidor Friedman, MD, FACEP, in presenting the survey results during the organization's annual meeting. "Violence in emergency departments is not only affecting medical staff, it is affecting patients," he continued.

Findings from the poll, included:

"Just in hospitals and healthcare in general, people are at their most vulnerable, and family members are at their most worried. The ER is the worst-case scenario for most, so it is this extremely volatile experience," said Leigh Vinocur, MD, FACEP, past chair of ACEP's Emergency Department Violence Committee and a national spokesperson for the organization.

She added that when most people think about doctors and nurses being harmed or killed, they think of those practicing in war-torn counties. "Yet, here in the United States, it's possible for your ER physician to become a victim of violence."

Add overcrowding and boarding into the mix of heightened emotions, and Vinocur said it isn't surprising to see tempers flare. While nearly half the physicians surveyed have been physically assaulted and more than 70 percent have witnessed someone else be assaulted, Vinocur said the numbers climb even higher when verbal abuse is added to equation. And while this poll was conducted among emergency physicians, she said nurses are often on the front lines of the potential danger. "The person who is more hands-on with the patient is susceptible to even more abuse," she pointed out.

"If you look at the Bureau of Labor Statistics, being a healthcare professional is one of the most dangerous professions ... and it's very underreported," Vinocur said, noting those in healthcare chose the profession to help people and often don't report incidences because they recognize patients are under stress and don't want to stigmatize them.

Even while being mindful the situation might cause patients and family members to act in ways they normally wouldn't, Vinocur said she believes hospitals are trying to get in front of bad behaviors that could quickly escalate. "Hospitals and health systems realize it's the safety of their employees and also the safety of their patients," she said.

Of increasing concern, however, are freestanding EDs and urgent care centers. While most hospitals have guards, Vinocur pointed out, "In these ambulatory settings where you are siloed and there's no security, you are even more vulnerable ... and a lot of healthcare is moving to ambulatory settings."

To offset the disturbing trend in violence, Vinocur said there are a number of concrete steps facilities and health systems could take to improve safety. Additional security is one key step whether that is in the form of more guards or more cameras on site. When adding security cameras, it's beneficial to have the devices visible so that individuals are aware their actions are being recorded. Improved visitor screening is another crucial step. In some areas, particularly large urban areas, metal detectors help screen for weapons. In addition, Vinocur said staff should be trained to ask patients if there is anyone who shouldn't be allowed in to see them to help curb potential domestic violence interactions.

"Training people to deescalate situations, too, is important ... teaching hospital staff to recognize the signs of someone who is escalating as they are starting to get more and more agitated," she said.

Vinocur noted clinicians could also play a vital role in easing agitation through clear communication with patients and family members to keep them up to speed. While it's easy for physicians to get distracted because they are so busy, she said it's crucial to be aware of how stressful the situation is for patients and their families and why it's so important to foster engagement.

And a calmer emergency department is ultimately a safer one.