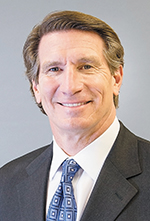 FAYETTEVILLE - Three Eagle Award recipients were formally recognized during Washington Regional​ Medical Foundation's Gala at Walton Arts Center. Established in 1994,​ the Eagle Award for Outstanding Health Leadership is given to individuals or organizations that make​ outstanding contributions to the improvement of healthcare in Northwest Arkansas. This year's recipients​ are Dr. Scott A. Bailey, Dr. J. Thaddeus Beck and Dr. Hugh B. Higginbotham.​

Dr. Scott Bailey, a Bentonville native, received his medical degree from the University of Arkansas for​ Medical Sciences in Little Rock and completed an OB/GYN residency at Memorial Medical Center in​ Savannah, Georgia. He is board-certified by the American Board of Obstetrics & Gynecology.​

Dr. Bailey launched his career at the Parkhill Clinic for Women in 1988. He was the first robotic certified​ physician in Northwest Arkansas and performed the first robotic hysterectomy in the state. Dr. Bailey​ played a critical role in the establishment of the Beau Foundation to support the Community Clinic's​

Prenatal Pathways program, demonstrating his commitment to all patients, but more specifically, those who​ are uninsured and in need.​

Dr. Bailey currently serves as president of Parkhill Clinic for Women. He served as chief of staff at Willow​ Creek Women's Hospital for over a decade and on the Board of Directors of Willow Creek Women's​ Hospital and the Arkansas Perinatal Association. Dr. Bailey is active in medical staff leadership at​ Washington Regional, having served as chairman of the OB/GYN and surgery departments. He is a Fellow​ of the American College of Obstetrics and Gynecology and a member of the Arkansas Medical Society.​

Dr. Bailey was Celebrate Arkansas' 2016 Best OB/GYN and received the 2011 Hawks-Workman Award​ from UAMS for outstanding contributions to the health and welfare of mothers and babies in Arkansas.​ 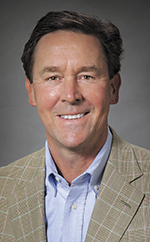 Dr. Beck, along with Drs. Daniel Bradford and Malcolm Hayward, started the Highlands Oncology Group, PA in June of 1996, transforming the practice of oncology medicine throughout Northwest Arkansas. He is an accredited author of over 90 papers and abstracts and played a part in launching Highlands Oncology's Clinical Trials Program. This unique program includes 21 full-time staff and 35 open protocols with approximately 80 active patients who likely would have no alternatives if these trials didn't exist. Since 2000, Dr. Beck has been the Principal Investigator (PI) in 288 studies and sub-PI in another 52 studies. The trials program has gained the trust of many drug developers, giving Highlands access to some of the most promising developmental therapies.​

Dr. Beck and his wife Melanie were recognized as the 2018 Philanthropists of the Year by the NWA Association of Fundraising Professionals. In addition, Dr. Beck has served as a board member for Susan G. Komen Ozark, was a founder of Hope Cancer Resources and was a 2010 Gentleman of Distinction for Hope.​ 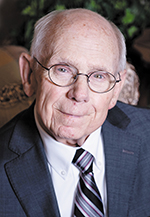 Dr. Hugh Higginbotham earned his medical degree and completed residency in internal medicine at the University of Missouri Columbia School of Medicine, as well as a residency in cardiology with the American Heart Association. Dr. Higginbotham obtained a fellowship in cardiology from the Barnes Hospital Fellowship Program. He served as a cardiologist in the US Army during the Vietnam War, and after his military service at Fort Leonard Wood, moved to Fayetteville and became the fourth member of the Fayetteville Diagnostic Clinic.​

As a former Eagle Scout and prior to his medical career, he was an avid canoer and fisherman but did not have much time to pursue those interests during his 60-year medical career. After a brief "retirement" from private practice in 1998, Dr. Higginbotham served another 14 years reading EKG's and providing personalized follow-up with his colleagues.​

Following his most recent retirement, he is spending time with his wife of 38 years, Donna, and focusing on his health. He enjoys time with his family and his two Yorkshire Terriers, Maggie and Mollie.​

The Gala will include a cocktail reception, awards ceremony and entertainment provided by Piano Men: A Tribute to Elton John & Billy Joel starring Craig A. Meyer and Gregory Scott. An after-party will take place in the Walton Arts Center atrium featuring the local favorite dance band, Full House. The 2019 Gala proceeds will be dedicated to support construction of a new Cancer Support Home in Fayetteville.